When I conceived the idea for a P-blog last month, this word was the first one I thought of.  I don’t know why because I never hear it, nor use it.  I even thought then that it was a mere swearword, like idiot.  But wiktionary told me otherwise:

(derogatory slang) A person who smokes cannabis frequently, to excess.

Who came to mind instantly was Derrick, a pothead in the truest sense of the word.  In his fifties, happy-go-lucky with occasional bouts of depression, nature and animal lover, easy to be with, calling a spade a fucking spade.

He had permanently bloodshot

eyes.  The only time when he was not smoking pot was when he had just returned from a week-long ayurvedic cleansing retreat.  He looked well.  Was clear-headed and frankly, a bit too serious and intense for my liking, because he was not stoned.  He swore he would never eat another piece of meat or smoke another joint in his life.  He felt SO great!  Holier-than-thou also.

I think his resolution barely survived a week.  I could tell when he accosted me on my way out of his property after a party one evening when he bashed my car, forcing me to open my window.  His pants were down and with a

sheepish grin he said ‘Look what you’re getting if you stay the night.’  Ah, the pot, she is a potent temptress.  I laughed, rolled up the window and drove home.  True as Bob, as they say in South Africa.  The last thing I heard was that he was doing well, charming as ever, even twenty years later.  Because you don’t die of smoking pot if used responsibly.  See link #1 below.

My own experience with pot was a memorable one.  I was 26 and it did not result in a lifetime of pot smoking.  Quite the contrary.  I never smoked it anyway, but I ate it.  Baked in a cake by my friend & housemate who didn’t have the foggiest how much of the stuff to put in, so she just guessed.  It may have been a bit strong, that space cake.

At first I thought that I was immune to it and decided it was a waste of money.  It was a Sunday evening and I had ironing to do!  After about an hour I looked at myself in the mirror while ironing and suddenly wondered ‘Who on earth does her ironing on a Sunday night?!’  It had begun.  I joined my friend in the living room where I got a case of the giggles, while she remained utterly unaffected by it (only to get violently ill the next morning, shame).

She sat in a comfy chair with her knees

pulled up around which she held her arms.  In that composition I saw the following scenery (except that she missed a knee, of which shortcoming I informed her): 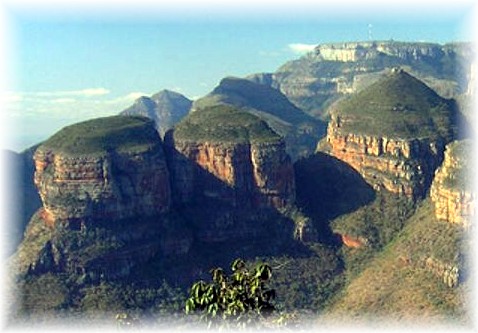 If you had another knee, they would be the three rondavels!

I remember all this as if it was yesterday, as well as the music playing in the background of my stonedness: 1) Pink Floyd and 2) Alan Parsons Project.  I was never able to dissociate the experience from 1) The great gig in the sky, and 2) Sirius.

Not having lived in the Netherlands during the new coffee shop age, to me a coffee shop has always remained a place where you can sit on a terrace, drink coffee and watch people walk by.  And discuss them if you happen to be with someone.  To call a place like that a coffee shop in Holland would be a faux pas.  Say, if you agree to meet someone in a coffee shop, you are bound to smell a whole lotta pot.  Wikipedia may call it a Cannabis coffee shop, but that’s not what they’re called in Holland.  Just plain coffee shop. 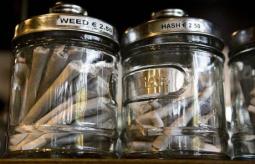 Watch out: There are special regulations for foreign tourists.

For sale in Dutch coffee shops:

Recently it came to my attention that Dutch marihuana is allegedly far more potent than the same stuff from other countries.  Be ware, brothers and sisters.

Please note: When it comes to pot, I am like Switzerland.  Do what you like.  You can be for or against: either way, it’s your prerogative.  This is just my little, hopefully a little quirky account of pot (just because I write about anything that starts with a P, and being Dutch may have something to do with it – we are so casual about these things).  No debate or headbutting is condoned.  If you like to share your own (funny) story, please do leave a scribble (I may edit it).

Would you like to drop a note? Cancel reply